We are introducing two new versions of our LiveAmp mobile amplifier to enable EEG research that works with a low number of electrodes. The LiveAmp 8 and 16 enable high-quality wireless recording of 8 and 16 channels, respectively. 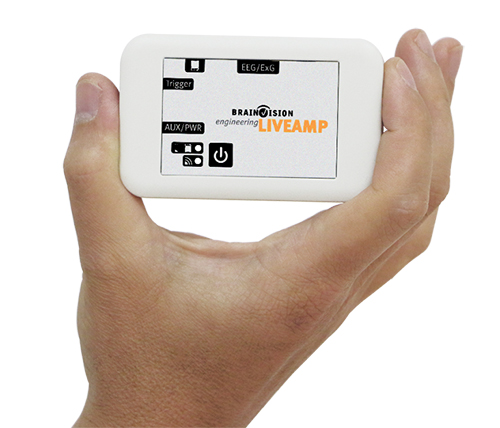 When the LiveAmp was first released in October 2015, it set new standards for high-quality wireless EEG recording. With a weight of less than 60 grams (including battery!) and a compact size of 80mm x 50mm x 10mm this 32-channel amplifier quickly became the go-to solution for mobile EEG applications.

While many mobile EEG solutions have a constrained feature set to allow mobility, our LiveAmp users do not have to make compromises:

LiveAmp’s recording characteristics are comparable to high-end laboratory EEG systems; 24 bit A/D conversion, a sampling rate of up to 1kHz at a noise level of less than 2 µV pp with CMRR higher than 110 dB.

LiveAmp can be combined with any of the Brain Products electrode systems; you can use passive/active/dry electrodes. The original amplifier can either be used as a 32ch referential EEG amplifier or you can set it up as a combined EEG bipolar amplifier (in this case you would have 24 referential EEG channels and 8 bipolar channels).

Made for MoBI and wearable applications

LiveAmp comes with a built in 3-axis accelerometer.

LiveAmp can be expanded with a Sensor and Trigger extension that offers 8 Trigger In / 8 Trigger Out ports and connection possibilities for up to 8 sensors.

LiveAmp has the possibility to store recorded data internally, to the hard disk of the recording computer or to both. It offers the possibility to record data for more than 10 hours without interruption. This gives you the potential to record high quality data virtually anywhere, and under any circumstance, by having your subject wear a cap and carry a device that is less than half the weight of an iPhone 6.

All of these features made the LiveAmp popular among EEG researchers that conduct experiments outside the lab, including Mobile Brain/Body Imaging (MoBI) or brain-computer interface (BCI) researchers. Some of these users would like to have a solution for when only a small number of EEG channels is needed. This is why we created the LiveAmp 8 and 16 with 8 and 16 EEG channels, respectively.

Both versions will be available from September 2017.