Brain Products is happy to announce a new version of the TriggerBox. The new product allows you to not only merge triggers from different sources, but it also acts as a virtual serial port that you can use as an interface between experimental control software and EEG amplifiers in order to send triggers with a timing accuracy below 1 ms.

We released the first version of the TriggerBox in 2014. Our goal, as always, was to meet the high standards expected by our customers by supplying a versatile product able to handle triggers arriving from different sources, merge them and then forward them to an EEG amplifier. Thanks to the TriggerBox it became possible to handle such complex experimental setups in an easy and intuitive way, as long as a parallel (LPT) interface was available on the computer where the experiment control application was running.

Unfortunately, an issue that often arises is that newer PCs, in particular laptops, lack a parallel port interface. If you have already experienced this problem, you probably tried to overcome this restriction by implementing expansion cards and maybe you realised that it is not easy to find an adequate solution. I’m sure you would believe me if I told you that we have heard about this issue very often. Thus, even though the development of products for experimental control applications is not our primary focus, we recognised how much our customers needed this. As such we are proud to announce an improved version of the TriggerBox, which acts as a virtual serial port.

Before showing you how to use the improved version of the TriggerBox, it might help to explain a couple of technical terms:
In computing, a serial port (COM port) is a default interface used to communicate with peripherals and like the LPT port, it is supported by the most experimental control applications for sending/receiving triggers. “Virtual” refers to the fact that the interface is recognized and acts like a serial port but the communication between computer and TriggerBox occurs via USB.

In order to use the TriggerBox as virtual serial port you just need to install a small application, the TriggerBox Test IO. This application not only installs the required drivers but also allows you to verify that the experimental setup is functioning correctly.

Once installed, you can now start your experimental control software and select the serial port as the standard interface for the transmission of trigger pulses. This step is necessary in every software and may be more or less intuitive. Fortunately, even if this is not the case, for the most popular applications you can find a lot of information in the dedicated forum or user manual.

Finally, you can start enjoying our intuitive, reliable, and accurate product with a timing accuracy below 1 ms! 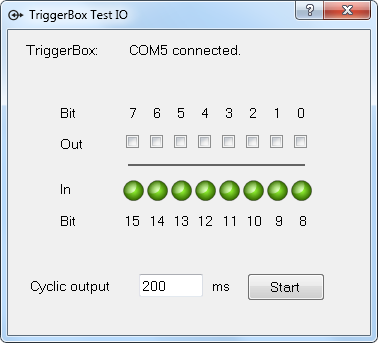 The timing issue was the core of the new development and we tested it very carefully. To this end, we used a small application able to send triggers to the parallel as well as to the virtual serial port at the same time. The data was recorded with Recorder using an actiCHamp at a sampling rate of 50 kHz. Then, the Analyzer solution Marker Timing was used to visualize the temporal distance between each successive pair of markers. The impressive results can be observed in Figure 2.

Figure 2: The timing variance of the triggers sent via LPT (black line) and serial (red line) port is similar and the highest deviation – for only one out of more than 300 triggers – is smaller than half millisecond (0.46 ms).