Despite some interesting new developments in the area of EEG Recording Caps like sponge-and-saltwater-nets or dry-electrode-headsets, the majority of EEG research is still done with electrolyte-gel-filled-electrode-caps. Easycap manufactures caps with any channel number, any layout and for connection to any amplifier. This is not only for recording EEG alone, but also for recording EEG simultaneously with other data acquisition technologies like fMRI, MEG, NIRS, or during TMS or AC/DC stimulation. The caps come with active or passive electrodes, or with electrodes optimized for specific technical requirements. We have also designed special caps and belts for mobile EEG.

The variety of applications results in a multitude of different caps. So, in everyday life one is mainly concerned with which cap for what, or which cap do I need? This overview is organized around these important questions.

The Fabric Cap Itself

Easycap supplies two different types of cap, Subtemporal and SubInion. The SubInion type covers a larger area and is equal to Subtemporal in terms of comfort. There are slight advantages for the SubInion type as it provides a better fit to a larger number of head shapes and grips well on the forehead so there is less slipping. For new caps we specify the SubInion type and it is necessary to choose this type when electrode positions lower than a line from the canthi to the Inion are requested. The Subtemporal type is the older version and it is still used for many of the Standard Caps listed below. 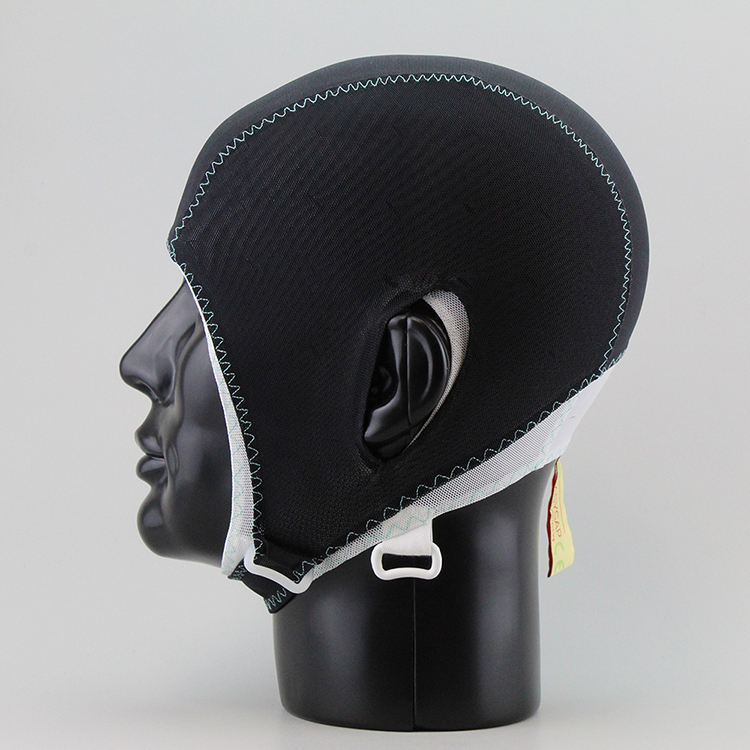 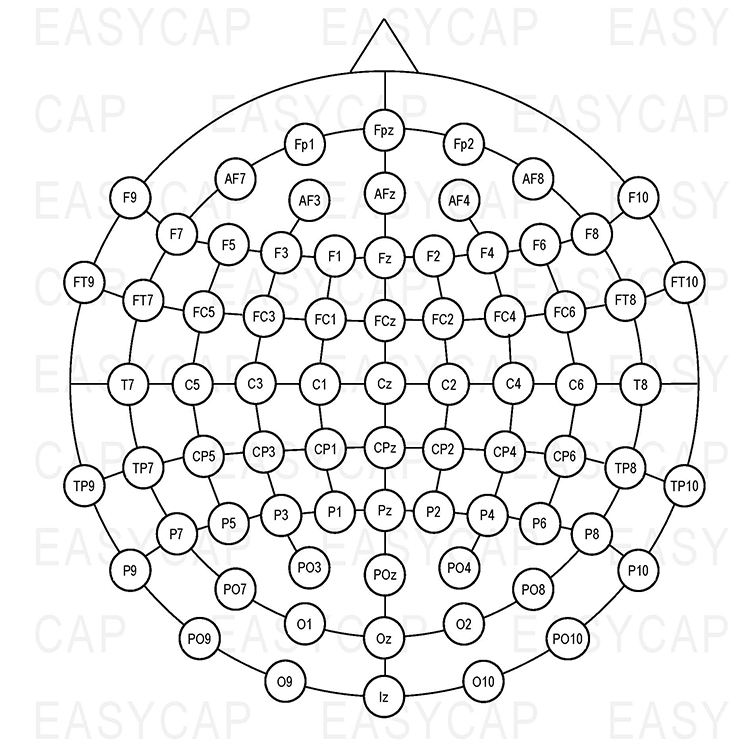 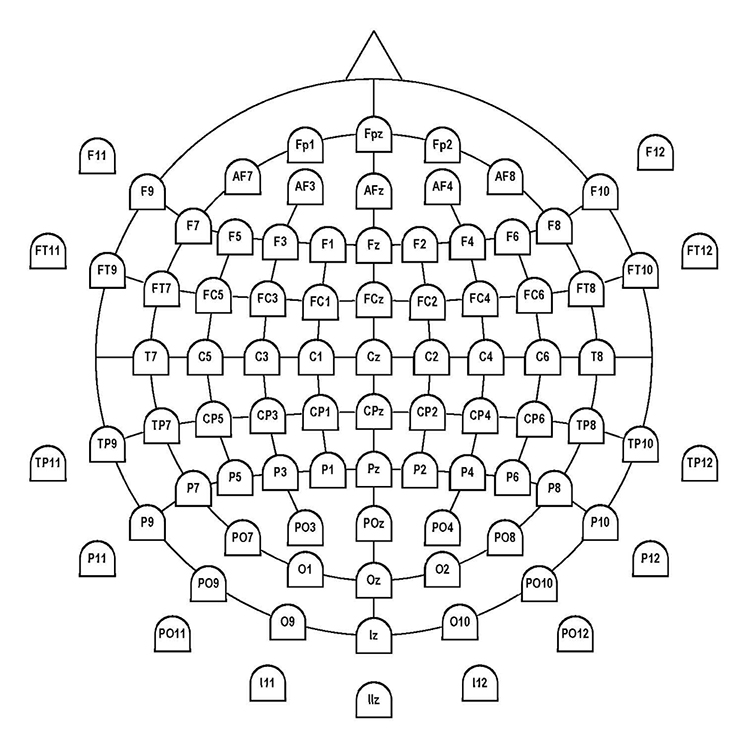 Both cap types, Subtemporal and SubInion, are available in two cap cuts. One cap cut provides a better fit for more oval/rectangular head shapes and is commonly used worldwide (called “Caucasian cut”). The other one is cut for rounder head shapes and typically provides a better fit for participants from countries like e.g. Korea, China, Taiwan and Japan (called “Asia Cut”).

Note: While our fabric caps are denoted with even numbers (56, 58, …) the sponge-and-saline nets (R-Nets) are denoted with odd numbers (55, 57, …). If you encounter a head circumference in between two cap or net sizes, then choose the next-larger cap size and the next-smaller net size. For example, a cap of size 56 and a net of size 55 both cover the same range from 54.5 to 56.4 cm.

If you are unsure about Cap Type and Cap Fabric, don’t worry. We are happy to select the right cap type and fabric for your application or advise you when making your choice. However, please make sure to provide your desired cap cut/s as well as size/s when placing your order with Easycap, Brain Products or your local Brain Products distributor.

The following list contains all Standard Cap Variants with a short description. A full list with every channel number, every layout and specification files of each cap variant can be obtained from info@easycap.de.

If your experiment requires a non-standard solution, let us know and we’ll work with you to find the perfect cap.

The latest generation of Brain Products’ active electrodes are called actiCAP slim. They can be used in caps in two different ways: 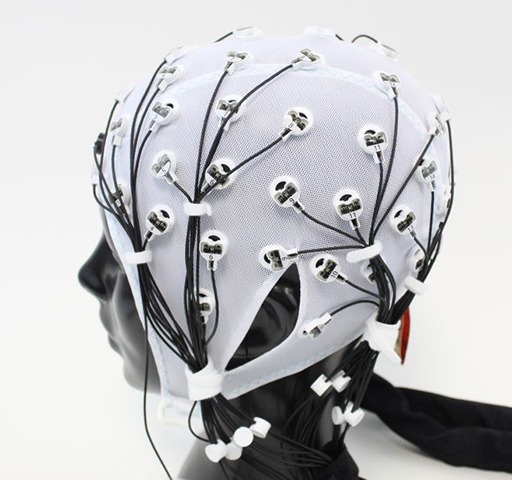 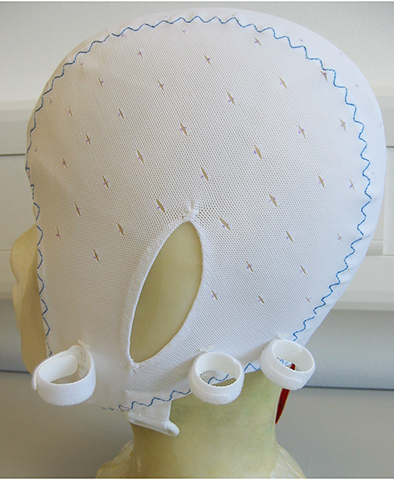 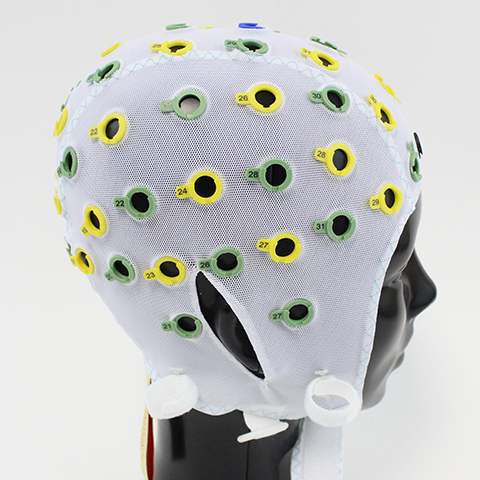 Variant with piggyback tornister on cap for LiveAmp (mobile use) 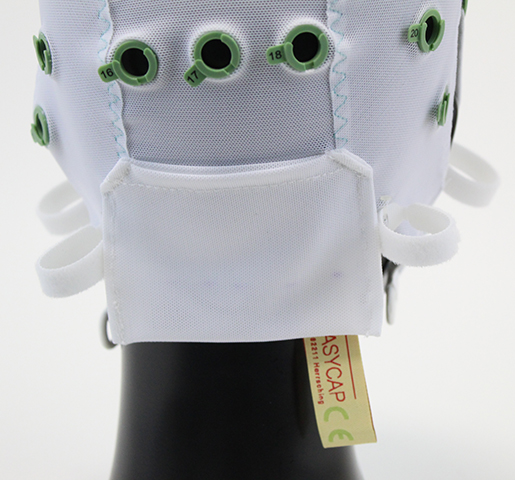 Before the slim active electrodes were available (June 2017) there were the (“classic”) actiCAP electrodes and caps. These had a different holder shape and the electrode itself was higher. Many of these systems are still in use and the classic actiCAPs with holders are still available. 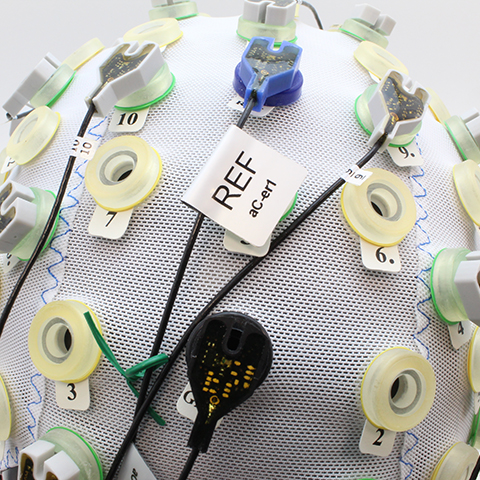 Note: The coloured labels of classic actiCAP holders are available as sets of 1 – 32.

The R-Nets are manufactured with connectors specific to the amplifier they are to be used with. The R-Net for BrainAmp will soon be available in a version suitable for combined EEG-fMRI recordings. In R-Nets the catalogue number and the serial number can be found on the connectors.

“BrainCap” is a group of caps which use passive Multitrodes as electrodes, that are permanently built in. Multitrodes always have sintered Ag/AgCl sensors and a large central opening. It is therefore easy to minimize impedances and to create a wide-spread contact area between the skin and electrolyte-gel, and from gel to sensor. Together this allows for stable and noise-free signals. The BrainCaps come in several variants optimized for EEG Recordings simultaneously with other data acquisition technologies, where active electrodes cannot be used.

BrainCap Variants for EEG & fMRI, EEG & TMS and EEG only 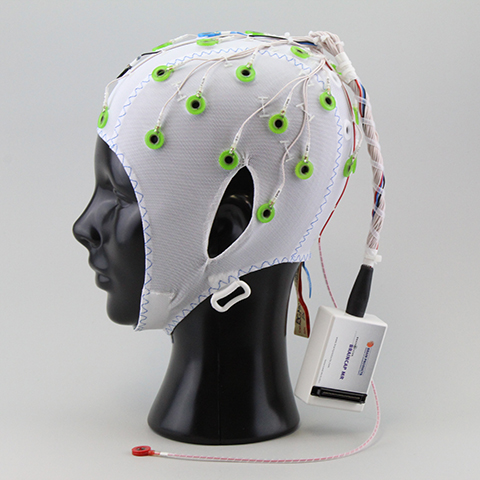 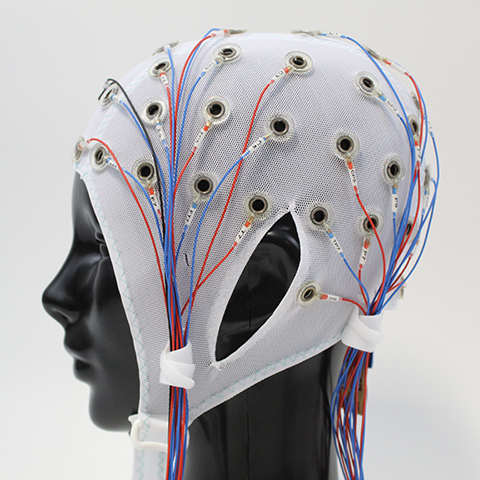 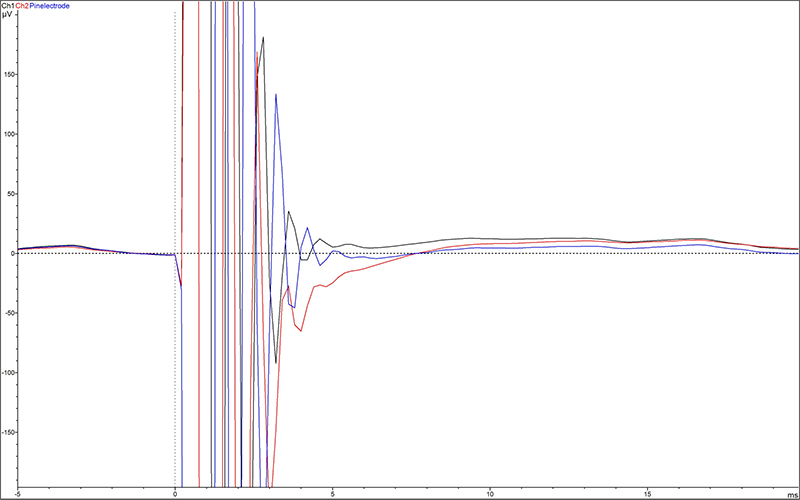 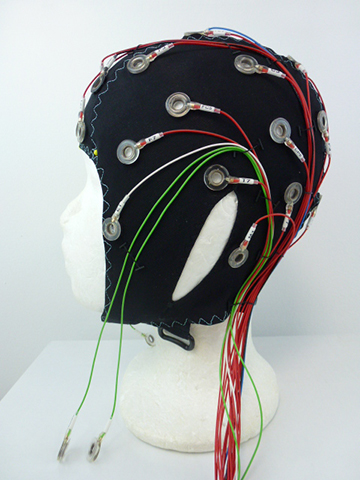 EasyCap:
Robust and Modular Caps where One Set of Electrodes is Moved from Cap to Cap

While in “BrainCaps” the electrodes are built-in, “EasyCaps” come with holders and one set of electrodes, which is then moved from cap (size) to cap (size). As the electrodes are what make an EEG recording cap expensive, this is a great way to minimize costs, especially when many cap sizes are required. Further advantages are that different layouts and a different number of channels can be chosen for every new experiment.

In fact, this is a cap style which Easycap started way back in 1996. EasyCap won over the scientific community with the painless and effective impedance minimization and the easy way to establish good contact between electrolyte gel and skin. Not to mention the stable, noise-free signal. In the course of the proceeding years we have learned that when handled with care these caps and electrodes can stay in service for a very long time. 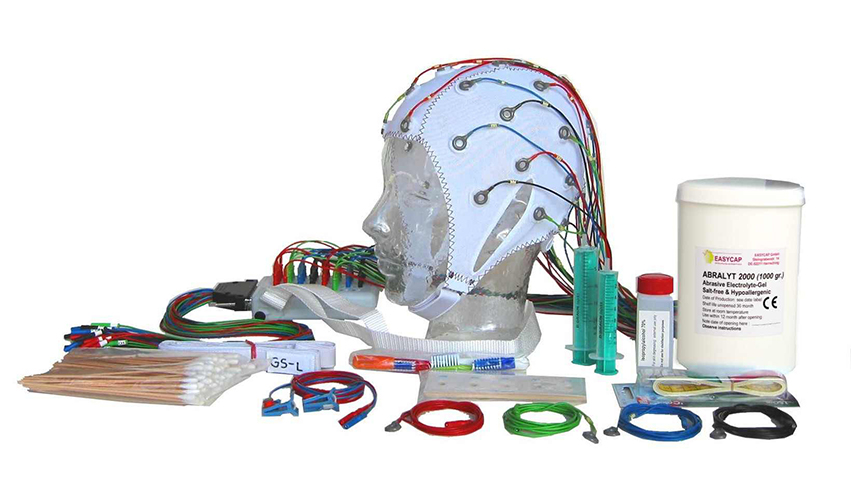 Tin electrodes are widely known as a cheaper alternative to sintered Ag/AgCl electrodes, therefore Easycap also offers a cap variant with built-in tin electrodes. However, it needs to be noted that their signals are much more susceptible to movement artifacts and noise, and frequencies smaller than 3Hz cannot be recorded. Therefore, we recommend them only for training purposes and for experimental settings where the head is fixed in a chin-rest. As always, the mechanical quality is as good as with all other Easycaps.

These fabric caps are sturdy enough to hold not only EEG electrodes in place, but also NIRS optodes, e.g. from NIRx, Hitachi and Artinis. It is possible to record EEG and NIRS simultaneously by placing electrodes and optodes into the same cap.

We can create caps from black fabric with openings for optode-grids according to the specification of the user. In some situations we can also supply the respective holders, and of course we can contribute the electrodes for simultaneous recordings.

While in the early years of NIRS, fixed inter-optodes distances had been required, this belief seems to have changed. This means that caps with openings according to 10%-system allow for temporary grids, whether they are frontal, lateral, parietal, or over certain brain areas (e.g. Broca/Wernicke) and then move the optode holders to other openings for the next experiment.

One feature of a cap is that it can be positioned repeatedly in the same place by aligning it to anatomical landmarks, i.e, Nasion, Inion, Vertex. If a cap is labelled with the 10/20 positions or individually determined spots, it can speed up identifying relevant locations, such as with rTMS applications. For this reason we also offer empty caps, or caps with marks and/or openings according to requests. 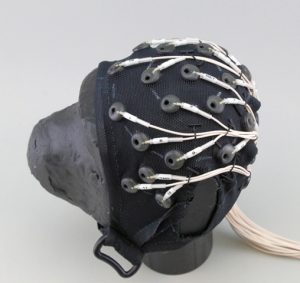 Caps for animals are always customizations which are created together with the user. We have already worked with users through the years to create caps for monkeys, dogs, horses, piglets, and sheep.

We are more than happy to share our experiences.

In simultaneous recordings of EEG in fMRI the artifact correction in 3D space can be improved if movement data is available, as they can be registered from resistive loops mounted onto the cap. Such Carbon Wire Loops (CWL), for BrainCap MR and recorded by a BrainAmp ExG MR are currently in development. Once released they will be available both for the new fMRI-suited caps and also as a later add-on for existing caps.

KRIOS by Northern Digital Instruments NDI, is an infrared camera system including software used to digitize individual, real-life electrode positions. In order to work, the electrodes are equipped with permanent reflectors in a highly qualitative and precise manner. Many Easycap/Brain Products electrodes can be equipped with these KRIOS markers: Multitrodes with large or small openings, R-Net electrodes and actiCAP slim electrodes. KRIOS markers are released for use in fMRI.

KRIOS compatibility can be ordered as an option for many caps and nets, but only for new versions.

Although rare, it can happen that an electrode of a BrainCap or an R-Net requires repair. Easycap offers repairs and reconditioning for all caps. Sometimes it may seem uneconomical to ship a cap half way around the world and back just to replace an electrode; therefore, for BrainCaps (except BrainCap MR, BrainCap MEG) and for R-Net (except R-Net MR) repair sets are available. After purchasing the to-be-replaced electrode and the repair set you can follow the instructions provided and carry out the replacement procedure yourself.

A repair set for exchanging the silicone patches of R-Nets will be available soon.

Hopefully this overview provides you with all the information required to find the best suited cap for your needs. Whether you want to try something new or replace and add to your existing inventory, we are here to help. We would like you to see Easycap as your extended workbench: please contact us with any cap or electrode related plan, problem, or idea you might have.