Using an advanced set-up of brain-machine interface (BMI), the team of the principal investigator Dr. Miguel Nicolelis presented successful cases of long term BMI training impact on rehabilitation. Eight paraplegics – some of them paralyzed for more than a decade by severe spinal cord injury – have shown improvement in controlled movements and sensation below their injury level. 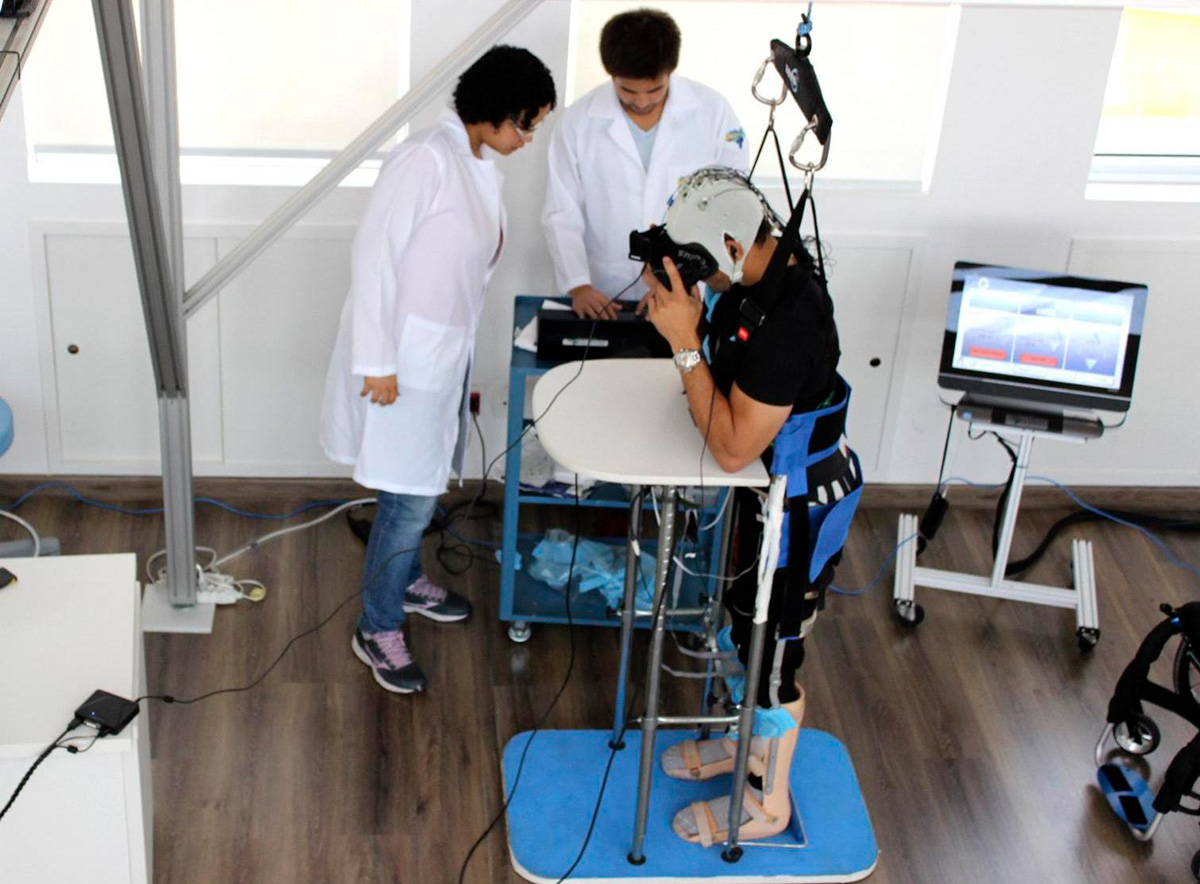 Juliano Pinto, 29 years old para-athlete, training to use the exoskeleton, a device developed by the team of Brazilian neuroscientist Miguel Nicolelis (Photo: AASDAP)

The results appear after one year of intensive use of a brain machine interface (BMI) protocol that includes an exoskeleton, and virtual reality (VR) technology. “Some of our patients, for the first time, were able to get out of their houses and go back to work,” said Miguel Nicolelis, co-director of the Duke University Centre for Neuroengineering, and based at the Alberto Santos Dumont Association neurorehabilitation laboratory in São Paulo, Brazil.

The critical step here was to get the patients accustomed to making a link between motor imagery and actual limb movements. Therefore, the experimenters fed back the sensation of walking in two ways. A pressure pad on the patient’s forearm delivered tactile information when feet met the ground while their brain progressively controlled the locomotion of a VR avatar. Subtle changes in the tactile and VR displays offered distinctive sensations of walking over grass or sand.

Even though none of the patients can functionally walk yet, one of them was able to intentionally move his leg while suspended in a gait training machine. Most of the patients regained bladder and bowel control, and refined their cardiovascular regulation, importantly improving quality of life. Dr. Nicolelis foresees a future disruptive moment for the rehabilitation field, considering how fast new equipment and software can evolve. “There are about 25 million people in the world paralyzed just with spinal cord injuries and when you receive a diagnosis of being a complete paraplegic people usually don’t do anything more to you. They just try to get you adapted to life in a wheelchair.”

Dr. Miguel Nicolelis’ visionary appeal allowed him to congregate key researchers in the areas of robotics, neuroscience, engineering and computation. The project started at the early spring of 2013 and the first results were presented at the opening game of the FIFA World Cup 2014 in São Paulo, Brazil. The project is the result of international collaboration among the Duke University Center for Neuroengineering, the Swiss Federal Institute of Technology in Lausanne, the Technical University of Munich, the Edmond and Lily Safra International Institute of Neuroscience of Natal in Brazil, the University of California, Davis, the University of Kentucky, and Regis Kopper of the Duke immersive Virtual Environment.

Part of this multi-professional team was able to set-up the first advancements in the brain-computer interface in late 1990’s. By using microwire arrays implanted into the brain surface of monkeys, researchers could use a computer to learn patterns during free behavior (i.e. locomotion or joystick game). Once the patterns of cell bursts were correctly correlated with certain directed movements, the joystick was no longer needed: monkeys could move the cursor on a screen only by thinking about doing it.

This recent approach, this time with human patients, relied upon electroencephalographic sensors which actively detects brain activity. The Brain Products V-Amp consists of 16 independent 24-bit A/D converters that can sample at up to 2 kHz per channel (16 channels). Now a computer can learn the oscillatory patterns required for patients to control the Locomat or an exoskeleton at will, closing the rehabilitation feedback loop.

The most interesting question regarding such an impressive rehabilitation of sensorimotor functioning is the plasticity mechanism involved in it. Two evidences can support the hypothesis of cortical and spinal plasticity. First, at least 2 – 25% of white matter is preserved even in severe spinal cord lesions. Second, spinal Central Pattern Generators (CPGs) would promote electrical feedback and plasticity with descending pathways in order to modulate gait patterns. In fact, previous results indicate that spinal cord plasticity must include neuronal sprouting in the vicinities of the spinal lesion. From there, rehabilitation could take place along alternative upstream connections to the brain.

Of course, large expectations are raised regarding availability of such a therapy for a larger audience. “We are already thinking about ways of disseminating this protocol with more affordable technology,” Nicolelis said.