The first association one makes with the Wireless Trigger system is that it can be used to send triggers without the need for cables and a bulky setup. This already gives you a lot of freedom when planning an experiment with LiveAmps where movement should not be restricted or where additional cables would compromise the experience of the participants.

What do you need to get started? 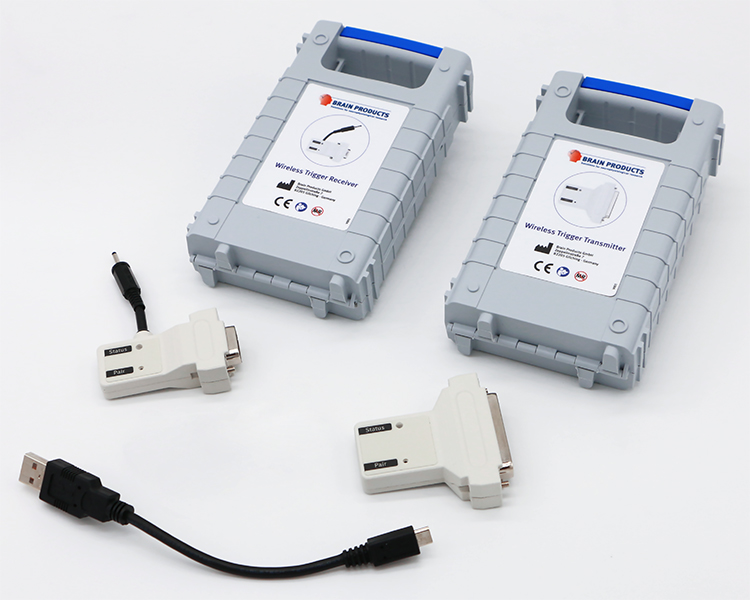 Well, at least one Transmitter and one Receiver. This is the regular configuration for your Wireless Trigger setup. To expand this setup, simply add up to four more Receivers. While in theory you can add as many receivers as you want, in practice the more Receivers you use, the more interference can happen. This is especially true if participants can freely move around and block the line of sight of other Receivers. If you want to use more, it is best to test it first in your specific setup.

Connect your one Transmitter to the trigger source. Ideally, this will be a TriggerBox (rev. 02) because the TriggerBox can power the Transmitter directly. If you want to use a parallel port instead, please make sure to connect a power supply via the USB connector on the side of the Transmitter. Connect all the Receivers to their respective Sensor & Trigger Extensions (STEs) by plugging the Receivers into the Trigger In connector and the attached power cable into the second power outlet next to the Trigger In port. The LED on the Receiver and Transmitter will light up green as soon as you enter Monitoring or Recording mode (in BrainVision Recorder), or as soon as you start an LSL stream with the LiveAmp LSL Connector. Please note that the LED only stays green if there is at least one active Receiver and one Transmitter within the same group. If the LEDs are not permanently green, make sure to adjust the pairing correctly.

Optional: To adjust the pairing, check the currently selected group for each device and modify it, if necessary. You can verify the group number by pressing the pair button for 1 s (use a paper clip or any other long and thin utensil) to enter the group selection mode. A red LED will blink 1–5 times, corresponding to the group number. If you want to change the group, press the button for 1 s again, thereby propagating through the groups in a circle (1→2→3→4→5→1→…). If you are satisfied with the selected group, just wait a few seconds until it is saved. You can also cancel the pairing process with a quick push of the button.  As soon as there is at least one active Receiver for your single Transmitter, the green LED will stay green (if Monitoring or Recording is still active in Recorder), indicating an idle state which stays on until you start sending triggers. Now, you can simply repeat the process with more Receivers that can be added to the same group.

It is always a good idea to immediately test the arrival of triggers at every Receiver. You can easily use the TriggerBox Test IO for this purpose and start sending a continuous sequence of triggers. This way, you can also get a first idea of the transmission quality. For example, if the distance between Transmitter and Receiver is too far or if the environment is particularly noisy, you will notice that not all triggers arrive as expected. Please note that the LED will flash red when triggers are being sent or received. However, not every trigger is visualized with a red flash, as the trigger frequency can be higher than the refresh rate of the LED. How to set up your hyperscanning experiment with Wireless Triggers

Figure 1 demonstrates a setup with up to five participants.

Our tests with up to 5 participants have confirmed trigger loss rates below 1 %, even in scenarios where participants were in motion and occasionally blocking sight between transmitter and receivers.

How to analyze and synchronize recorded data sets

After a successful experiment, you will end up with individual files per participant. However, all these files will have the same triggers that can be used to merge the data and check for eventual clock drifts between the recordings. Please read our Hyperscanning series part 5 article to learn how to merge multiple data files in BrainVision Analyzer 2 and for further information. As mentioned previously, keep in mind that occasional triggers can still be lost. Therefore, make sure that all triggers required for a successful merge are present within the recordings, and recreate missing triggers, if necessary and possible.

As always, we are curious to read about your ideas how to use such a setup or to learn about your experiences describing already conducted experiments. Please contact us, we are looking forward to reading your feedback.

All articles of the hyperscanning series