Between May 26 and 28, 2016, more than 400 scientists attended the annual meeting of the German Society for Basic and Applied Psychophysiology (Deutsche Gesellschaft für Psychophysiologie und ihre Anwendung; DGPA), which this year was held in Berlin (Germany). Just as in previous years, Brain Products sponsored the Brain Products Young Scientist Award, granted to a young researcher for an outstanding paper. This year’s winner was Dr. Kathrin Ohla from the German Institute of Human Nutrition Potsdam-Rehbruecke (Section Psychophysiology of Food Perception) in Nuthetal, Germany. 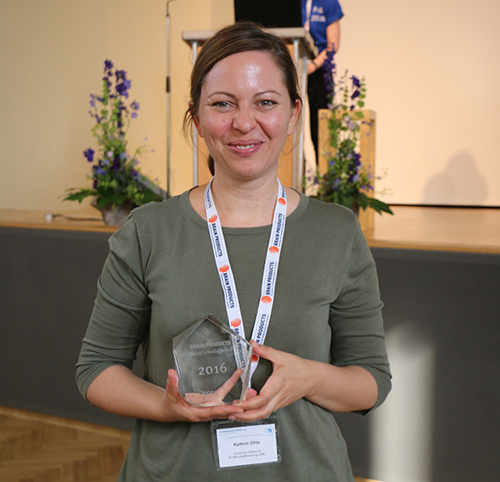 Kathrin Ohla earned her PhD in Psychology at Leipzig University in 2007 and has been working as the Junior Research Group leader “Psychophysiology of food perception” at the German Institute of Human Nutrition Potsdam-Rehbrücke (Germany) since 2012. For 2 years now she is also an associated researcher at the Berlin School of Mind and Brain.

The award, which is endowed with prize money of 1000 Euros, was awarded to Kathrin for her publication Taste quality decoding parallels taste sensations (Crouzet SM, Busch NA & Ohla K., Current Biology. 2015; 25(7):890-96, doi:10.1016/j.cub.2015.01.057). Here mulitvariate pattern analysis of single-trial EEG data was used to investigate which information about a taste is represented in taste-evoked brain responses. The study’s results provide the first evidence that taste quality is encoded at the earliest level of the taste processing cascade, much earlier than traditionally thought, and that the information encoded in the multivariate neural response patterns is also the basis for gustatory perceptual decision making.

Congratulations on winning the “Brain Products Young Scientist Award 2016”, Kathrin, and best wishes for your future!