The Brain Products Young Scientist Award is presented each year to recognize a young researcher’s outstanding publication in the field of EEG-based psychophysiological research. The winner is chosen by an independent jury and was awarded to Esra Al this year.

Although we could not present the award in person this year at the popular Psychologie und Gehirn (PuG) conference as usual, we are happy to announce that the long tradition of the “Brain Products Young Scientist Award” could continue uninterrupted.

This award recognizes a young researcher’s outstanding publication in the field of EEG-based physiological research. The winner is elected by an independent jury, which is appointed by the managing board of the Deutsche Gesellschaft für Psychologie und ihre Anwendung (DGPA). 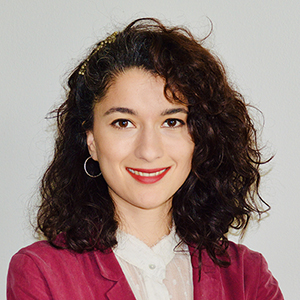 At Brain Products, we want to have a positive impact on the fields of psychology and neuroscience and thereby award and celebrate excellent EEG research in these domains. By recognizing young scientists, we aim to support the next generation of researchers and their scientific discoveries.

This year’s winner, Esra Al, is a PhD candidate in neuroscience at the Berlin School of Mind and Brain. Her primary research and experimentation is conducted at the Max Planck Institute for Human Cognitive and Brain Sciences in Leipzig and her research interests include the science of consciousness, heart-brain interactions, as well as psychophysics.

In her publication, “Heart-brain interactions shape somatosensory perception and evoked potentials”, she and her co-authors investigated how the heartbeat modulates conscious perception. This study targeted mechanisms linked to heart, brain and perception using somatosensory detection and localization tasks together with EEG. This work provides a general framework to explain how internal signals may be integrated into our conscious perception of the world. For more details, see the original abstract (below) and don’t miss out on reading the full publication. If you’re interested in checking out more of her scientific research, check out other contributions here.

Even though humans are mostly not aware of their heartbeats, several heartbeat-related effects have been reported to influence conscious perception. It is not clear whether these effects are distinct or related phenomena, or whether they are early sensory effects or late decisional processes. Combining electroencephalography and electrocardiography, along with signal detection theory analyses, we identify two distinct heartbeat-related influences on conscious perception differentially related to early vs. late somatosensory processing. First, an effect on early sensory processing was found for the heartbeat-evoked potential (HEP), a marker of cardiac interoception. The amplitude of the prestimulus HEP negatively correlated with localization and detection of somatosensory stimuli, reflecting a more conservative detection bias (criterion). Importantly, higher HEP amplitudes were followed by decreases in early (P50) as well as late (N140, P300) somatosensory-evoked potential (SEP) amplitudes. Second, stimulus timing along the cardiac cycle also affected perception. During systole, stimuli were detected and correctly localized less frequently, relating to a shift in perceptual sensitivity. This perceptual attenuation was accompanied by the suppression of only late SEP components (P300) and was stronger for individuals with a more stable heart rate. Both heart-related effects were independent of alpha oscillations’ influence on somatosensory processing. We explain cardiac cycle timing effects in a predictive coding account and suggest that HEP-related effects might reflect spontaneous shifts between interoception and exteroception or modulations of general attentional resources. Thus, our results provide a general conceptual framework to explain how internal signals can be integrated into our conscious perception of the world.

On behalf of the whole Brain Products team, congratulations, Esra, on winning this award. We will for sure continue to follow your research and wish you all the best for your future!