At the Montreal Neurological Institute and Hospital, we work with combined EEG and fMRI acquisition to study epileptic patients to determine the brain region responsible for the generation of seizures that characterize this condition. We use Carbon Wire Loops (CWLs) to help recover a clean signal from the EEG recorded in the MR environment.

Carbon Wire Loops (CWLs) can be used to record head movements resulting from the ballistocardiogram or other causes. The signals recorded by the loops can be used as approximate templates of the artifacts, and parts of the signal resembling them can be removed from the EEG channels. This helps to recover a cleaned EEG signal that can be used for investigating transient epileptic activity. We compared two different algorithms for cleaning the EEG based on the carbon wire loop signals. Both algorithms worked well; they not only correct the ballistocardiogram artifact, but they also correct the movement artifacts. We chose the algorithm in which the estimation of the parameters was not iterative, to avoid the chance of divergence that could theoretically result in noise being added to the signal. In conclusion, we have a very favorable impression of the carbon wire loop correction. The EEG looks cleaner than when corrected with the average artifact subtraction method, and in most of the subjects this correction is sufficient for our measurements at 3 T.

At the Montreal Neurological Institute and Hospital, we have worked with combined EEG and fMRI acquisition since the beginning of the technique. We use it for research studies on epileptic patients, in order to determine the brain region responsible for the generation of seizures that characterize this condition. In a nutshell, with the patient at rest or sleeping in the MR scanner, we identify short transients of epileptic activity in the EEG known as interictal epileptiform discharges (IEDs). The timing of these events is used to build the regressors of an event-based paradigm. Thus, we combine the sensitivity to epileptic signals of the EEG with the good spatial resolution and whole head coverage of fMRI.

CWLs have been in use for more than a decade as an aid in recovering a clean signal from the EEG recorded inside the scanner (Masterton et al., 2007). After correcting the EEG for the effect of the MR gradients, the interference caused by small head movements and the ballistocardiogram still contaminates the EEG signal. The CWLs placed over the scalp are affected by the head movements and ballistocardiogram too, but do not record any brain activity. Thus, the signals recorded by the loops can be used as approximate templates of the interference and parts of the signal resembling them can be removed from the EEG channels.

We started using CWLs routinely last year. What follows is an account of the developed procedures, results, and impressions so far.

We built the carbon loops out of a carbon filament wire made of microscopic carbon strands in a PVC jacket, 1 mm diameter, 150 Ohm per meter. The total length of each loop is 7.5 m for a total resistance of 1125 Ohm. The loops themselves are of about 8 cm diameter, the wire pairs of each loop are braided (Figure 1). Most of our research subjects are in-patients undergoing long term EEG monitoring, and they already have (MR compatible) scalp electrodes on their scalp, thus we do not use a cap. The CWLs are placed on top of the electrodes and secured with bandages. They are placed on the sides, back and top of the head. The wires of these five loops are braided together (Figure 1). In some subjects a sixth loop was placed around the connector box. It is worth noting that our setup is for a specific application and a special population, as such it was developed by our in-house experts. The solution offered by Brain Products is a standard solution that can be purchased ready to use. 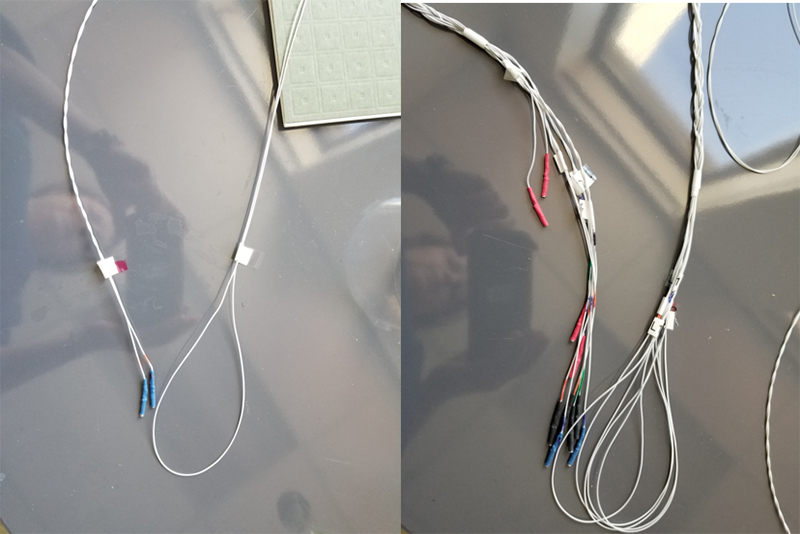 Figure 1: Single carbon wire loop and set of 5 braided together.

The electrodes bundle up at the top of the subject’s head. Inside the scanner, the electrode bundles and the braided connectors of the CWLs exit the coil together to reach the amplifiers which are positioned on a wooden table behind the scanner, which is the most appropriate position for our customised setup, giving quick access to the amplifiers in emergency situations (hyperkinetic seizures). Between the coil and the amplifiers, cables are secured using sandbags to minimize vibrations during the scan.

After correcting for the gradient artifact, the CWL signal was used to remove motion related artifact. The idea behind the correction algorithms is that the cardioballistic artifact and possible movement artifacts in the EEG channels are a linear combination of the signal recorded by the loops and time-shifted versions of these signals. The time shift accounts for the potential effect of pressure waves on blood vessels. This effect cannot be considered instantaneous, since these pressure waves travel at slow speed and the time they require to cover inter-electrode distances can be larger than the sampling interval. The weights of the linear combination are not necessarily constant in time given possible changes in the recording environment, e.g. slight changes in the head position or in respiration depth. We tested two algorithms described in the literature. Both algorithms implement a solution to the problem stated above, but with different approaches.

We implemented both algorithms in Matlab and configured the code to be run directly from BrainVision Analyzer (Brain Products GmbH, Gilching, Germany) software using the Matlab Transformation. All the parameters values were selected as in the respective papers. This required downsampling of the signals from 500 to 250 samples per second in the case of the Masterton et al. algorithm.

The way in which CWL algorithms have been compared in the literature is by computing which one removes the highest percentage of the energy from the EEG signals. However, since we are interested mostly in transient events, we did not rely on this approach and instead we visually compared four different signals. These are the uncorrected signals, the signals corrected based on the CWLs with both mentioned algorithms, and the signal corrected with the traditional AAS algorithm, which does not require carbon loops, and simply computes an average shape of the ballistocardiogram artifact centered around a few neighboring EKG peaks and subtracts it.

Both algorithms based on CWLs worked well. They not only correct the ballistocardiogram artifact as the AAS method, but they also correct the movement artifacts. We encountered one case in which the recursive least square algorithm diverged, leading to the amplification of high frequency activity in the EEG signal (Figure 2). While we could have explored the parameters of the algorithm to minimize the chances of such events, the recursive nature of the filter makes divergence theoretically possible even though unlikely. The van der Meer et al. algorithm is not recursive, so divergence cannot happen. Since this algorithm was also faster, we chose it as our preferred option.

Figure 2: Example of the raw signal (after MR artifact correction, left), and the output from Masterton et al algorithm (right). High frequency activity is visible in channel F10 after the correction. Since this activity was not present in the original signal it indicates the recursive estimation of the weighting coefficients diverged for this channel.

While our main interest is that the IEDs are easily distinguishable in the cleaned EEG signal, we also are interested in possible false positives, i.e. instances in which the partial deletion of an artifact leads to a signal that resembles an IED (Figure 3). Since there is no way to completely avoid this later situation, we adopted the following workflow: 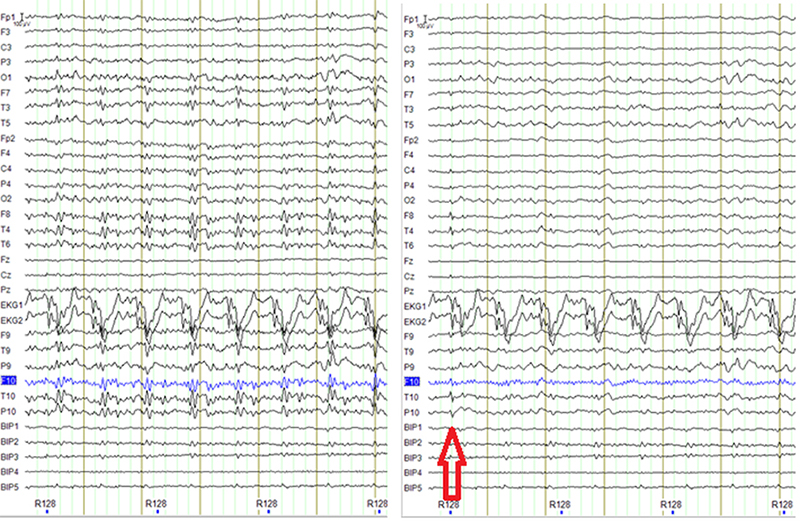 Figure 3: Example showing a possible false positive, sharp activity in F8, T4, T10, P10 that might be not present in the EEG before carbon wire loop correction (on the left panel). This is likely an incomplete correction of a movement artifact given the sharp activity in the EKG channels.

We have used carbon loop wires in a set of 21 patients so far, in about 75 % of them the results were good, and it was deemed unnecessary to use the AAS method. In three cases the AAS result was used instead, and in two cases the combination of carbon wire loop-based correction followed by the AAS correction was used.

In our experience with EEG-fMRI, it is not unusual to employ different methods separately or in combination for different subjects. The artifact in the EEG can be quite variable between subjects. Moreover, different types of IEDs may require different levels of artifact removal. For example, large generalized spike and wave discharges are easily distinguishable even without any ballistocardiogram correction, whereas small temporal spikes require very clean EEG in the temporal regions, which are the most affected by BCG artifacts. Researchers should be able to apply all of the available methods at their disposal, as for each subject the most effective method may be different.

Although not our primary objective, the signal from the carbon loops also offers a better way to monitor the subject’s movement. As mentioned before, the AAS method does not remove the movement artifacts. In fact, the artifact can be enhanced, as it is included in the average template used by the AAS and can contaminate neighboring epochs. The algorithms based on the CWLs remove the movement artifacts to the point that small movements may not appear at all in the cleaned EEG signal. Another drawback of the AAS method is that it requires a consistent detection of the heartbeat. We record two EKG channels with electrodes placed on the shoulder of the subjects, and occasionally the quality of the EKG signal is not good. This leads to errors in the automatic pulse detection that need to be manually corrected in a time-consuming process (see Figure 4). The CWLs are completely independent of the EKG recording, and thus unaffected by its quality. 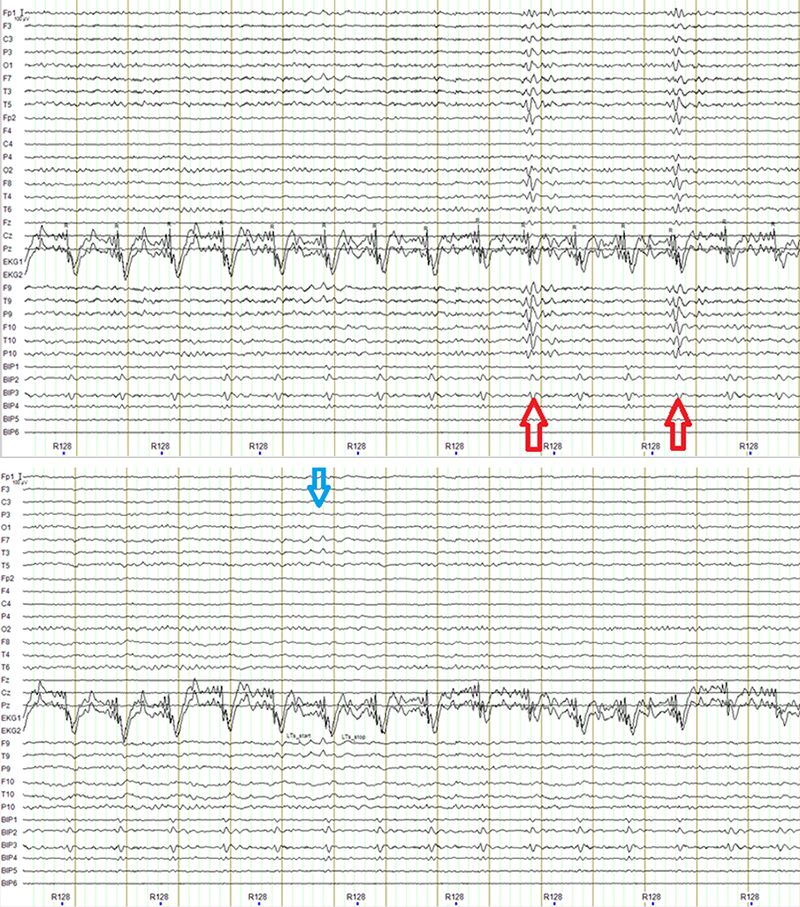 Figure 4: Top: example of the effect of a slight timing error in the automatic detection of the heartbeat in the AAS algorithm. The arrows indicate the timing of the incorrectly subtracted pulses. The overall quality of the EEG also degrades because this error also affects the estimation of the average shape of the ballistocardiogram artifact, and the removal is less than optimal. Compare the top panel to the bottom one showing the result of the CWL algorithm, the delta burst indicated by the blue arrow is more easily distinguished. Note that these effects can be avoided by manually correcting the timing of the pulses. However, if there is movement overlapping one or more pulses the estimate of the ballistocardiogram can be noisy and lead to an incomplete subtraction that degrades the quality of the EEG signal.

We compared two different algorithms for implementing the EEG cleaning based on the carbon wire loop signals. Both had typically a good performance, so we chose the one in which the estimation of the parameters was not iterative, to avoid the chance of divergence that could theoretically result in noise being added to the signal. The chosen algorithm (van der Meer., 2016) was also the fastest.

In conclusion, we have a very favorable impression of the carbon wire loop correction. The EEG looks cleaner than when corrected with the AAS method, and in most of the subjects this correction is sufficient for our measurements at 3 T. This translates in an important reduction in reviewing time, since the AAS algorithm requires a visual verification, and possible correction, of the automatic detections of EKG peaks. This time-consuming step is no longer necessary most of the time. Another thing to note, is that there are no significant drawbacks associated with the carbon wire loops.