Brain Products is happy to announce a new version of the CapTrak electrode localization system (version 1.1.0 to be released in mid-April 2015), which interfaces directly with the actiCHamp EEG recording system. 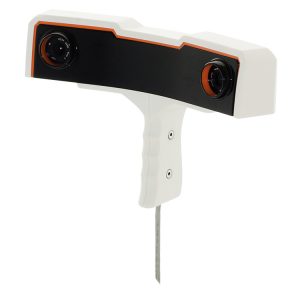 CapTrak is an innovative, easy-to-use and accurate electrode localization tool, employing a photometric triangulation method to detect the positions of the Brain Products active electrodes within very short time. The lightweight, handheld scanner is equipped with two integrated cameras. To detect the electrode positions, the scanner is moved over the test subject’s head by following the patterns of lit LED electrodes activated by the software. Tests performed on artificial three-dimensional head models with electrodes placed at known locations have demonstrated that CapTrak is a very accurate tool. The calculated mean error of the scanned electrode positions was always below 1 millimeter.

The most amazing feature of CapTrak, however, is that it is incredibly fast! Acquiring the position of 128 channels is possible in less than 5 minutes, even for untrained users.

What are the key points of the actiCHamp/CapTrak combination?

For the readers that are not yet familiar with our actiCHamp, let me give you a brief summary of the system’s main features first.

The 24-bit, battery supplied amplifier offers up to 160 EEG channels, 8 AUX inputs for peripheral signal measurements, a sampling frequency of up to 100 KHz as well as 8-bit input and output trigger ports. actiCHamp is used in combination with Brain Products active electrodes.

Thanks to an integrated LED, the design of the active electrodes allows to measure and display the impedance at each electrode. A slit in the electrode housing makes it possible to insert the gel when the experimental subject is already wearing the cap. As with CapTrak, actiCHamp is equally appreciated for the incredible speed with which even an untrained user can prepare a high-density EEG cap: 128 channel in less than 5 minutes.

What could be a better match for the actiCHamp system than CapTrak, a very fast electrode localization system? The newest version of the CapTrak software (version 1.1.0) interfaces seamlessly with the actiCHamp hardware. CapTrak doesn’t require anything additional and will work out of the box with the actiCHamp.

Is CapTrak in general and, in particular, the CapTrak/actiCHamp combination useful only if you are interested in source analysis? Absolutely not!

CapTrak allows to compare two measurements. This feature will help figure out if the cap was misplaced or moved by the subject during the measurement.

Also, CapTrak measures the actual electrode positions against the position of the fiducial points. It compares the actual distance between the electrodes with the expected distance according to standard templates. In this way, CapTrak gives you a further hint on whether or not the cap has been misplaced or the size does not fit the subject. 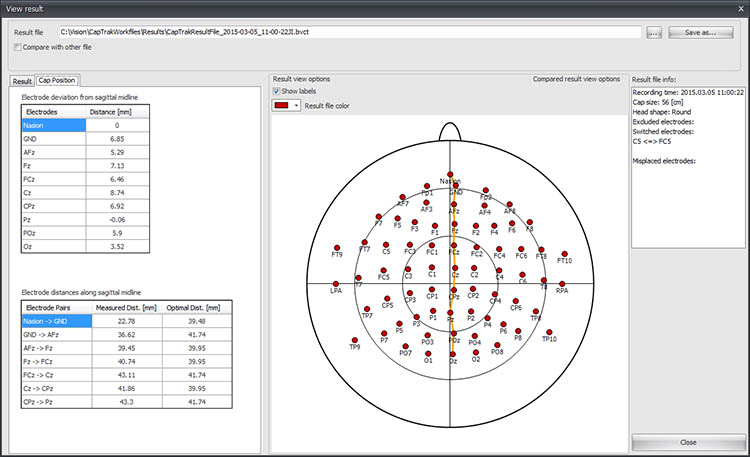 BrainVision CapTrak Software: An example of a comparison between the position of the detected electrodes and their expected locations and relative distances.